Are Newark Public Schools now up for sell? 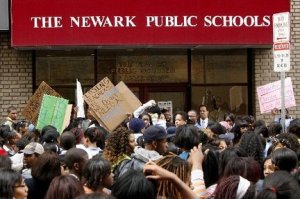 As a product of Newark schools, I’m aware that the issues that Newark face are challenges not uncommon to most urban districts. And, when those issues are remedied then the results for students could very well change too. Issues like unemployment, single parent households, incarcerated parents, teenage pregnancy, drug addicted babies are many of the reasons why I suspect Newark youth are not performing well. The playing field is just not in their favor.

I would even go further to say that if you polled to find out the level of education of the parents, the numbers could be just as disproportionate. Education has to be valued at home.

So, are Newark Public Schools for sell? I’m not sure. However, something is happening that is a little bizarre. Recently, Newark announced a plan to close eight schools. And, they’ve helped facilitate the opening of an exponential number of charter schools. In 2010, Mark Zuckerberg pumped one hundred million dollars into the district, Bill & Melinda Gates have pumped millions in too. I find that throwing money at a problem doesn’t solve it unless you’re willing to treat the source or the root. And, no one is doing it. Gov. Christie needs to turn his attention to developing the communities in the city of Newark. The teachers and principals will never be able to work miracles.

It’s sort of unfortunate that politicians think that things can change in a term or two. What has to happen in Newark is a cultural change. Teachers can’t address individualized learning and meet state mandates because their kids learn differently. “No Child Left Behind”, a state run district, billionaire’s throwing countless dollars at the problem, and the students are still not performing on level with other districts in the state.

Someone has to ask the question, when public organizations accept private donations, who’s answering to who? Are the people who live and pay taxes in the city my boss or is it this billionaire tycoon? I’m not claiming to diagnose and solve the problem. But, the way this school district is operating is unlike anything seen in other districts. The system was broken, is still broken and no amount of money thrown into the district can fix it. It takes an involved community of parents, educators, and politicians actually invested in making the system work.