President Obama is ‘his brothers’ keeper’

At the conclusion of President Obama’s administration, most will remember health care as the definitive policy of his term in the White House. Health care by far has been most of the bane of his existence as he fought and negotiated for the policy. However, for disadvantaged boys of color, the “My Brothers Keeper Initiative” will be the policy that could save most of their lives.

In the black community you may find yourself in some very interesting conversations about Obama. Some conversations are highly favorable, while others remain less than impressed. The thing is, being the first President of African decent can be a Catch 22 at times. As president you have to be concerned about the welfare and issues that affect all Americans. Clearly, he can’t be bogged down by all the many complex issues in black America; although many wish he would. 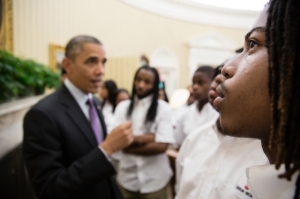 This initiative that Obama launched last week will support a forgotten group of Americans, poor, black and Latino males.

“There are a lot of kids out there who need help, who are getting a lot of negative reinforcement, Obama said. “And is there more that we can do to give them the sense that their country cares about them and values them and is willing to invest in them?”

Successful organizations that are working with young men will now have additional support from the federal government. In urban communities with immense poverty, issues like drugs, violence, and high drop-out rates, they need this type of support. Building strong young men who can make positive impacts in their community, may be the solution to turning these communities around.

Kudos to Obama for recognizing the need to support these efforts. If you want to know more about “My Brothers Keeper” go to: http://www.whitehouse.gov.